Thomas & Heather Ross
We are a husband and wife, saved by grace through faith.

Today saw us participating in church visitation in the morning and Mrs. Sue and I taking tea at the home of a Catholic social worker woman named Mary, who has worked much with the cholera epidemic that has broken out in western Kenya.  While Mary is a hospitable woman greatly concerned for the physical needs of Kenya’s poor, she is not yet saved.  Welcoming us in to her country home, Mary took us past the goat’s pen, the chickens’ nests, and the pumpkin patch to her front door.  Then she scurried about in the kitchen preparing tea and sweet potatoes for us while we waited on the couch in her living room. 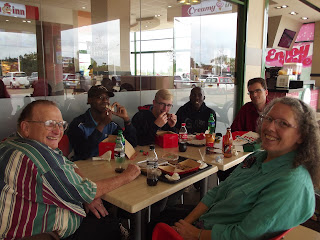 With Dr. Rick, Mrs. Sue, Aaron, Daniel, and Taylor at lunch in the local mall

After visitation, we headed to an American style mall for lunch, where Thomas and I enjoyed a "tikka chicken pizza" (tikka is an Indian spice).  After that, Thomas wrote his exam for Trinitarianism and then we were off to go visiting with the Baptist church in Thika town.  Ashlyn accompanied Thomas and me on our visits, and Thomas was able to go through an entire gospel presentation with two different men.  We made it to a total of three houses in 2 ½ hours!

Next we headed to Mike and Tina’s home, where Tina had prepared a delicious meal of spaghetti, garlic bread, and salad from the lettuce in her garden.  She even made an amazingly scrumptious mango pie, which we enjoyed with vanilla ice cream.

We arrived back at the guest house about 9:10 p.m. that evening.

This morning we piled into Dr. Rick’s vehicle for a trip across Thika town to a church in one of the many neighborhoods there.  Traffic wasn’t too bad and, within twenty minutes, we had arrived at the large brown building with a tin roof and sign out front announcing it as the local Baptist church.  A pew full of children sat at the back and while Aaron directed singing, I shared hymnals with them.  They would be leaving in a few minutes for Sunday School with Mrs. Sue. 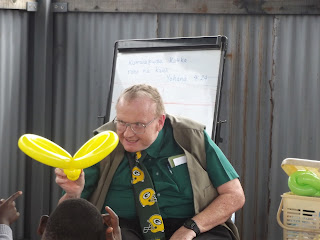 In the front of the churchyard stands a small fenced in area where the Sunday School children meet each week.  Sue was decorating the place with sticker charts strung up along the metal siding.  Two long tables stretched across the area, and small plastic chairs around the tables provided places for the children.  Later, the children would gather here for children's church, where Dr. Rick, Aaron, and Daniel would teach them.

Thomas preached for Sunday School.  For the morning service, we sang a duet of “When I Survey,” with my accompanying us on Daniel’s electric keyboard. That morning, Thomas preached a Gospel message from John 3.  A young man named Stephen sat on the right hand side, about three rows from the front.  He was listening intently to the sermon and afterwards, sat down with Thomas, asked questions, and listened to another Gospel presentation.  Stephen is like so many here in Kenya, who are seeking for God and wanting to learn truth.

After a home cooked afternoon meal at Dr. Rick’s house, we prepared for a fruit fellowship that evening and then left for the afternoon service at the local Baptist church in downtown Thika, where several missionary families attended in the evenings.  At this service I had the privilege of accompanying for a choir full of MKs (missionary kids) and Thomas again preached—this time the message was from Romans 6.  Back at Dr. Rick’s house,  all the missionaries came to enjoy a fruit fellowship.  There I was introduced to “MK Clue,” a take-off of the murder mystery game Clue, created by Mrs. Sue.  The boys played chess with Thomas while I played MK Clue with the girls.

Soon, it was time for the missionaries to head home and for Thomas and me to make final preparations for our safari to the Maasai Mara (we leave tomorrow morning at 5 a.m.!)

Monday and Tuesday
June 8 and 9 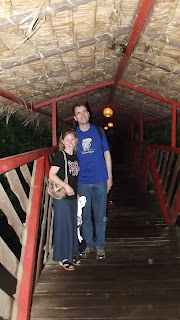 It's 9:19 p.m. on Tuesday evening, and I'm seated outside by an open fire in the Maasai Mara at a camp in Africa.  I can hear hippos' loud groans as they splash through the water, swimming down the stream behind me.  Before me, the hotel-camp where we are staying is illuminated with hanging lamps, each surrounded by its own earthen-colored globe.  A wooden Massai tribesman, clad in traditional red garb, the flowing garment cast around his shoulder, greets entrants to the place.

When we arrived yesterday afternoon, an African Maasai greeted us with a wooden tray full of cold wrapped napkins, to refresh us from our journey.  (After about three hours of travel, we had jounced down eighty kilometers of bumpy gravel roads, pocked with pot holes before we finally arrived at the camp, so the moist cloths were a welcome refreshment.)  A few minutes later, he collected our used napkins and approached the hotel desk again, this time with a tray full of fresh squeezed juice, which we readily enjoyed. 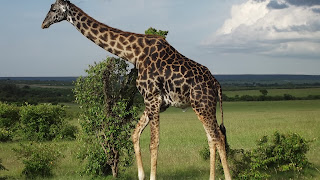 Pictures of Wildlife at the Game Park

Our room would be T20, we learned, as a steward hefted our small piece of luggage onto his shoulder and showed us the way.  We walked under a low hanging flowering trellis down a stone walkway, to where our "tent" overlooked the river.  "You'll see hippos here," he told us.  The "tent" had been built under a thatch roof and atop a large  concrete slab.  Two stone pillars holding hanging lanterns stood at the front of the porch, where two cushioned wooden chairs and a table beckoned visitors to enjoy themselves in view of a heart-shaped branch which overlooked the brown waters of the river.

Unzipping our tent, the steward cautioned us to be sure we fully closed the tent door each time we left, since monkeys loved to play in the area.  "This is cool," Thomas said as the steward left.  "It combines first world luxury with third world primitiveness."  For example, electricity ran only between certain hours.  Hot water was available only between the hours of 6 and 9 in the morning or 7 and 10 in the evening.  I would experience another level of that primitiveness on my last morning at breakfast.  Leaving the table to retrieve a plate and walk through the buffet line, I glanced back at Table 5, where I had left my purse, for I had detected motion.  A creature was putting its mouth into the butter and jam on our table.  Was it a mouse?  Startled and without considering my reaction, I let out a small scream and went walking toward the table, while two wings immediately flapped up from the table and left the breakfast table.  "Sorry" a waiter said, going to retrieve the butter and jam, at which the bird had breakfasted for two small pecks. 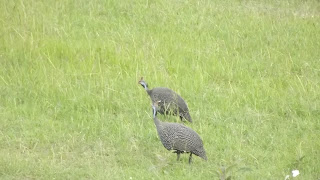 Two guinea fowl at the park

On the drive into the hotel, we had spotted several herds of gazelle, whose little white tails flapped almost constantly.  Large topi reminded us of small moose.  Unique birds—such as guinea fowl and ostrich welcomed us as well. 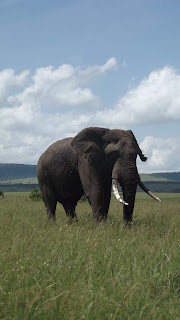 An elephant trudges past.

Now, as I sit about the coals outside the dining area, an Indian family, one by one, ventures out to take seats next to the fire.  I talk to the girl, a sixth grader, who has traveled quite a bit in her twelve years.  She's already been on safari in South Africa and once before in Kenya but today, she tells me, they've had a superb time.  Not only have they spotted 25 hyenas feasting on an elephant carcass, they've also watched five cheetahs on the hunt, who used the top of a jeep for an observatory.  Passengers in the jeep took selfies with the cheetahs that hung down next to their windows.  After almost two hours had passed, the cheetahs bounced down from their perch to go on a hunt. 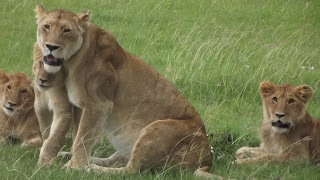 These lions were inches away from our vehicle on Monday and seemed quite content.

We saw a dozen elephants today, a dozen giraffes, and watched a lion chase a wildebeest from afar, but we certainly hadn't encountered anything so adventurous as my young friend's experiences!

Tomorrow Peter will take us back to Nairobi.  He drives aggressively, as if he's racing to get his passengers back to their destination.  Large semis inch up steep mountains, but Peter passes them.  Motorcycles vie for space on tiny dirt roads, but Peter whizzes by.  Pedestrians, sheep, and cattle need to learn that Peter is coming through, because he grazes past in a flash, although he does slow down long enough for the smallest to scamper out of the way.  From my view in the second seat, it seems there are but centimeters between us and cars and trucks ahead of us.  On the way here, I closed by eyes and rested, partly to still my rumbling stomach and partly to avoid the reality of Peter's aggressive driving.

Our stay here has been rich and varied.   Rich, because we've been treated like wealthy mzungus (white people).  By Kenyan standards, we are indeed incredibly wealthy.  In fact, 50% of the world's wealth can be found in America.  We've enjoyed stewards, waiters, and guides, chauffeurs at our service and felt surrounded by luxury here at our hotel-camp.  Varied, because we've seen so much exotic wildlife, received invitations for Thomas to speak at several churches, and visited a Maasai village. 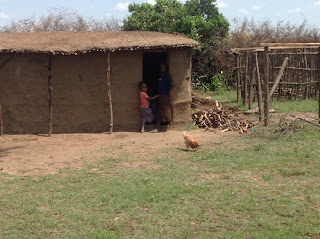 A mother and child in a nearby Maasai village 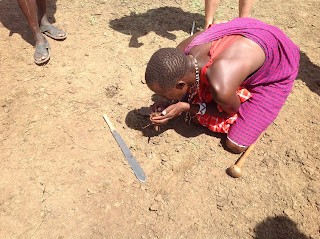 A Massai man rubs sticks together to start a fire

Young men, clad in traditional Maasai costume, greeted us with a celebratory dance.   A middle aged woman, outside the door of her cow dung hut, introduced herself as the pastor of the village.  Three young men rubbed sticks together and started some brush on fire.  Next the women emerged from their huts, some carrying children on their backs, to greet us in their customary way with a welcome dance.  Their ears, pierced with many earrings, hung down from the weight of their beads.  The women motioned me inside their circle, so I went to greet them.  As a gesture of welcome, one woman took the beaded necklace from her head and placed it around my neck. 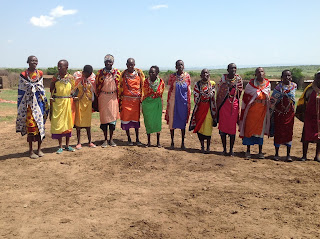 The women of the village greet us

Next we visited the inside of a cow dung hut, where a child, dirt covering him like condensation on a window, stood in the shadows while our guide explained the features of the mud home to us.  A small shelf housed the entirety of the dishware.  The entire hut was illuminated with a single square window, about 8 inches by 8 inches.  When we left the village, we paraded down the aisle of handwork, where women sat with their beadwork for us to buy.  We greeted them with "sopa," or hello, and I gave several of them Swahili tracts to read.  Though the Maasai are considered Christian, that label is difficult to define at best, since they still embrace pagan practices such as practice polygamy, female circumcision, and body mutilation.

Though we'll have been here under 48 hours, I feel that the safari has been a most welcomed and refreshing experience.  It was a pricey but worthwhile anniversary celebration and we've gotten a view of Africa unlike the kind we would have had otherwise.
Posted by Thomas & Heather Ross at 7:30 AM No comments: